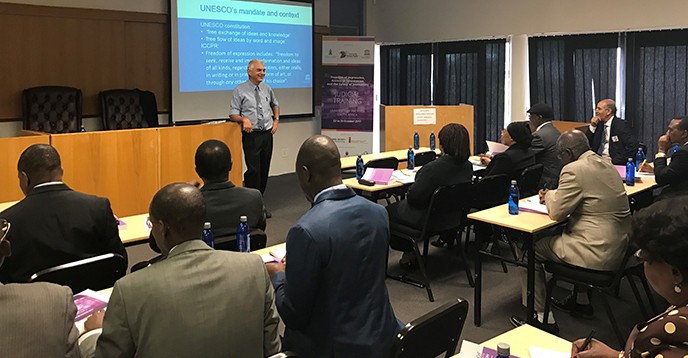 UNESCO kicked off a three day seminar in Pretoria, South African, on Monday 23 October, with participation of judges from 13 countries and the Economic Community of West Africa court. The judges came from countries including Cameroon, Ethiopia, the Gambia, Ghana, Guinea, Mauritania, Mozambique, Nigeria, South Africa, South-Sudan, Uganda, Tanzania, and Zambia.

A total of 20 judges discussed issues ranging from the importance of freedom of expression, journalists’ safety and ethics, through to defamation and Internet shut-downs.

“You, the African judges, are of great importance for the defence of human rights on the continent,” said UNESCO Assistant Director General for Communication and Information, Frank La Rue, in a welcoming video message.

Elaborating further in person at the course, UNESCO official Guy Berger explained the importance of press freedom in the context of building knowledge societies as a means to sustainable development.

Berger, who is UNESCO’s director for Freedom of Expression and Media Development, stated that courts’ roles in limiting expression to curb abuses should be seen against the broader imperative needing to defend legitimate expression.

“Press freedom, which is vital for African development, can be understood as a 4 point model,” he added. “In terms of this model, a package of media freedom, pluralism, independence and safety creates a healthy media environment for a society”.

A further 4 point model was also proposed for the judges to approach Internet issues. This the ROAM framework which takes account of the extent to which the online world can be structured through the package of human rights, openness, accessibility, and multi-stakeholder governance.

Lively discussions featured in this and other presentations which dealt with the African Human Rights System, as well as on Self-Regulation and its relevance to the judicial sector.

In mid-November, a follow-up online course will be launched for other judicial actors who could not make it to Pretoria this week. This initiative builds on experience of such a course in Latin America where more than 5000 judges and and legal professionals have been trained in over three years.