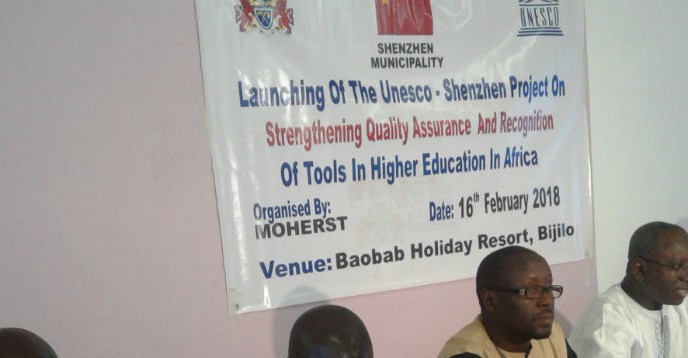 In a bid to strengthen higher education systems in Africa, UNESCO launched the project “Strengthening Quality Assurance in Higher Education in Africa” in The Gambia on Friday 16th February 2018. It was held as a prelude to a training workshop that will develop the capacity of both the Ministry of Higher Education, Research Science and Technology (MoHERST) and the National Accreditation and Quality Assurance Agency (NAQAA) in order to establish a standard qualifications assurance framework.

The Gambia has seen a rapid increase in the number of higher and tertiary institutions in recent years, most of which are led by the private sector. This raises a lot of questions with regard to regulation that can place them in a framework for quality assurance – something that has already been identified as a challenge in the country’s education sector policy. At the same time, there is also a mismatch between the labour market and the types of training offered by most institutions. Higher education institutions are also concentrated in the greater Banjul area, reducing opportunities for students in rural areas.

Nonetheless, there has been a strong commitment from the government to promote higher education, as well as growing support from international organizations in this area. As a regulatory body, NAQAA is gradually being strengthened, training content and curricula are being reviewed, with institutions responding very positively to these efforts made to strengthen quality assurance.

To overcome these critical problems, UNESCO launched in 2017 the project “Strengthening Quality Assurance in Higher Education in Africa” to be implemented until 2020 in ten African countries. Following the launch of the project in Senegal and Togo, the official launch ceremony in The Gambia was held as a prelude to a training workshop for MoHERST and NAQAA.

According to the Permanent Secretary of MoHERST, the project is a “shining example” of South-South Cooperation, with the focus institutional capacity building in quality assurance being particularly crucial for NAQAA, which was established under MoHERST in 2015: “The NAQAA Act of 2015 and the Tertiary and Higher Education Policy 2014-2023 will serve as the legal instruments to guide the implementation of the Project. I trust these instruments are robust enough to meet the challenges of implementation.”

Ms. Salmon from UNESCO stated that the expansion of higher education is happening in a context of internationalization and regional integration dynamics: “This expansion not only seeks to promote the mobility of students and teachers to meet specific learning and training needs, but also the acquisition of experiences outside their countries of origin and the strengthening of regional identity.”

Through this project, financed by Shenzhen Municipal Government in the People’s Republic of China, UNESCO Dakar is supporting West African countries in the implementation of quality assurance activities in higher education. In Mali and Niger, the Office’s mission is to support the creation of national quality assurance agencies and it will support the institutional capacity building of quality assurance agencies recently established in The Gambia and Senegal. It will also monitor the effective implementation of the project in the four beneficiary countries as part of one wider initiative.

Higher Education at the UNESCO Office in Dakar: http://www.unesco.org/new/en/dakar/education/higher-education/