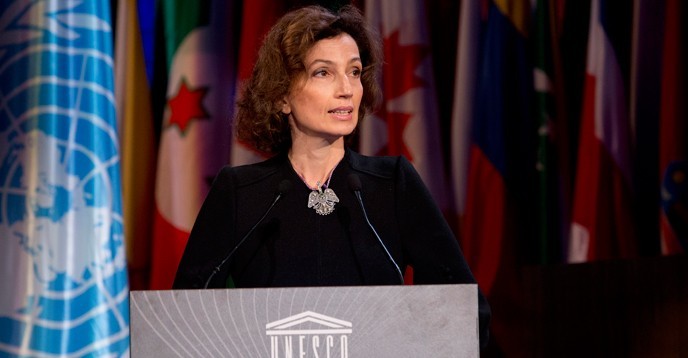 The Director-General of UNESCO, Audrey Azoulay, will travel to Brasilia (Brazil) on 19 and 20 March to launch the United Nations World Water Development Report at the 8th World Water Forum. This will be her first visit to Latin America, following trips to Africa and the Middle East.

The Director-General will take part in the official opening ceremony of the Forum alongside the President of Brazil, Michel Temer, Heads of State, as well as Prince Albert of Monaco and Crown Prince Naruhito of Japan. Ms Azoulay will plead the cause of those with limited access to water and advocate the achievement of the Sustainable Development Goals (SDGs), especially targets pertaining to water and Goal 6, which calls for access to safe water and sanitation.

After attending a luncheon hosted by the President of Brazil in honour of the Heads of State, the Director-General and UN-Water partners will lead the official launch of the United Nations’ World Water Development Report, whose theme this year concerns nature-based solutions. Coordinated by UNESCO’s World Water Assessment Programme, the Report brings together contributions from the 31 United Nations bodies and 39 international partners who make up UN-Water. It promotes nature-based solutions to improve fresh water quality and supply, and to mitigate the impact of natural disasters.

“We need new solutions in managing water resources so as to meet emerging challenges to water security caused by population growth and climate change. If we do nothing, some five billion people will be living in areas with poor access to water by 2050. This Report proposes solutions that are based on nature to manage water better. This is a major task all of us need to accomplish together, responsibly so as to avoid water related conflicts,” declared the Director-General of UNESCO.

During her official visit, the Director-General will have meetings with the Brazilian authorities, notably with President Temer accompanied by Foreign Affairs Minister, Aloysio Nunes, and the President of the Supreme Federal Court of Brazil, Cármem Lúcia.

Held every three years, the Forum is the main global venue for members of the water community and decision-makers to join forces and determine long-term action plans concerning this invaluable resource. It brings together 150 countries with the objective of raising awareness and bolstering political commitment concerning water use and management.

The United Nations World Water Development Report is available on request. It is under embargo until 19 March, 7 am UTC.

Contacts at UNESCO Office in Brasilia: