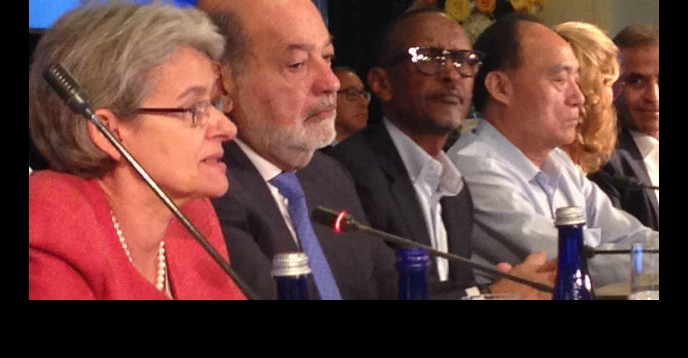 On 17 September 2017, UNESCO Director-General, Irina Bokova, addressed the annual meeting of the Broadband Commission for Sustainable Development, held in New York, in the presence of H.E. Mr Paul Kagame, President of the Republic of Rwanda, Mr Carlos Slim Helu, President of the Carlos Slim Foundation, and Mr Houlin Zhao, Secretary-General of the International Telecommunication Union.

“We need to ensure broadband gets high attention in the development agenda, combining connectivity and applications,” said President Kagame.

“For Africa, and other developing regions, this is a major concern. Our growing and youthful population is an asset, but we have to ensure there is sufficient economic opportunity.”

Carlos Slim spoke the revolutionary progress achieved across the world, thanks to new ICTs. He reminded all of the goal of the Commission to harness broadband for the marginalised: “this is the importance of connectivity for the least developped countries especially.”

The meeting was opened with a message of the UN Secretary General Antonio Guterres, who underlined the importance of such multi-stakeholder partnership, “to ensure all enjoy the benefits of new technologies,” especially developing countries facing “risk of being left behind.” New technologies should work “human dignity and the global good.”

“Much has changed since 2010, but the conviction of this Commission has never been so relevant,” said the Director-General, taking stock of progress made by the Commission since its launch seven years ago.

“We believe new technologies are a transformational force to build inclusive knowledge societies. Our conviction is that access is essential – but access must include investments in skills, education, relevant content,” declared Irina Bokova.

She highlighted that digital skills and digital literacy are the focus of the new Report of the Education Working Group launched on the same day, called ‘Digital Skills for Life and Work’ as well as the 2nd OER World Congress in Slovenia.

In this context, she highlighted the role of the Broadband Commission within the framework of the 2030 Agenda for Sustainable Development and the Paris Climate Change.

As this was her last meeting as Director-General, President Kagame thanked Irina Bokova for her champion leadership for human rights and dialogue as the basis for sustainable development and peace. On behalf of the Commission, he presented a plaque thanking Irina Bokova for her outstanding action at UNESCO and as co-vice Chair of the Broadband Commission for Sustainable Digital Development.

Director-General Bokova is co-vice chair of the Broadband Commission, which she launched in 2010, with co-chairs, H.E. Paul Kagame, President of Rwanda, and Mr Carlos Slim, CEO of the Carlos Slim Foundation, along with co-vice chair, Mr Haolin Zhou, Secretary-General of the ITU. The Broadband Commission brings together high-level officials with leading executives in the private sector, from across the world, to harness the digital revolution as a development revolution, for all women and men.

On the same day, the Director-General signed an agreement with the CEO of Nokia Corporation, Mr Rajeev Suri, to renew the Letter of Cooperation previously (2014) signed with Alcatel-Lucent (which merged with Nokia in January 2016) to promote equal participation and representation of women in STEM/STEAM education and careers.

The Director-General also congratulated the Broadband Commission for the launch of Equals Partnership that continues the work of the Broadband Commission Gender Digital Divide Working Group, co-led by UNESCO and GSMA, and that aims to create a global movement where women and girls are equal participants in the digital technology revolution. Under the Equals Partnership, UNESCO will co-lead the “Skills Development” coalition.

Prior to this meeting, the Commission issued the 2017 edition of its flagship State of Broadband report on 14 September, a unique global snapshot of broadband network access and affordability, with country-by-country data measuring broadband access against key advocacy targets set by the Commission in 2011.